Thomas Bramley produced postcards of all the main islands in the Bailiwick and was based in Guernsey.

Bramley's arrival date from England and the start of his postcard production is not known by the author, but it has been verified that he produced Guernsey postcards in 1908.

Through the years, Thomas Bramley marketed his postcards under many names and the different titled gallery sections here reflect this fact.

The Thomas Bramley images shown here are only a small representation of what is archivally held digitally by the author.

Conflicting dates for the end of production given online, have been given as 1927 to the 1930's, but It has been suggested to the author that way over 900 images were published from 1908 - 1928. This could be a conservative figure - Further research is required.

Bramley postcards are now scarce now and very collectible. Due to the this, prices are high. The author personally owns very few images due to arriving late on the scene and not willing to pay the prices!

Shown on this website is only a sample of the images from Thomas Bramley's vast output. A considerable number have been scanned for the Deane Photographic Archive but for time reasons only, they have not have been placed online. I am indebted to Winkle De La Mare for letting me have access to his photo collection for scanning for most of these images.

Bramley's photographs of Alderney were taken during during the 1920's and maybe in the 30's.

The author has now determined that he has in his collection some glass negative plates of Alderney that have been taken by Bramley - sometimes there are several different views of the same scene. It has to be remembered that most professional photographers take more than one shot in a particular location, and in those days, it is only after the film has been developed and studied that the best image of the batch will be used for production. It is therefore not inconceivable to say that similar shots to the published postcards exist that did not make it to the production stage. 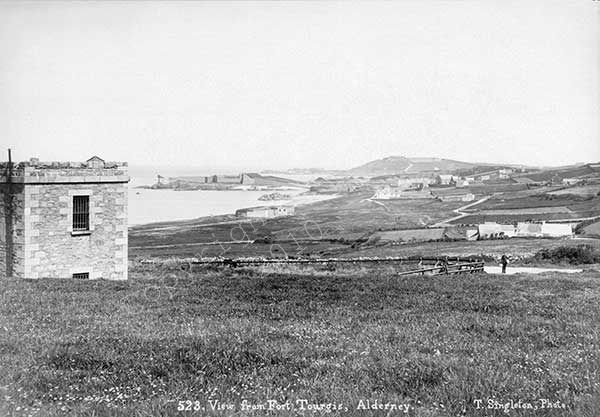