Sarah Louisa Cumber was born in St Peter Port on the 10 June 1820, and died on January 5th 1882 aged 61 years - she is buried in the Candie Cemetery, St Peter Port. Unfortunately at this time no photographic image can be found for Sarah. Her grave inscription and her death notice as published in 'The Star' is shown after the last paragraph.

Her father, Henry Cumber, was born in Devonshire House (the residence of the Society of Friends) Aldgate London where his father, William, was a member of the livery of Painters and Stainers and held the freedom of the city of London.

Miss Cumber's father, Henry became a druggist and moved to Guernsey where in 1817 he married a local girl, Mary Gallienne; Mary's parents were Thomas and Mary.

The first recorded residence in Guernsey for Sarah's parents was Fountain Street in Saint Peter Port, which is probably where Sarah Louisa was born.

Sarah was one of seven children having three sisters and three brothers. Her elder sister, Mary, and younger brother, Henry, remained in Guernsey.

Sarah's sister, Mary married William Sharshaw, from a family of Guernsey butchers, and they had one daughter also called Mary. Their daughter, Mary married James Gardner and they ran The Royal Hotel in Saint Peter Port.

Sarah's brother, Henry followed into his father’s profession and trained to be a Druggist alongside his father in Fountain Street Saint Peter Port. By 1851 Henry senior had died and his wife Mary and Henry junior continued the business, but now based at Number 3 Pollet Street. Sarah was still living with her mother and brother, her profession was listed as school teacher.

By 1861 the family is still living at 3 Pollet Street but their mother had died.

In the 1861 census Sarah had changed her earlier profession as that of a teacher to a Photographic Artist. At this time photography was a burgeoning profession and was usually linked to Chemists and Druggists.

Sarah became well respected in the world of photography for about thirty years specialising in portraiture for the well to do members of the Guernsey society. The fashion of the 1860’s was for people to have a carte de visite (cdv), similar to a visiting card with the bearer’s portrait thereon which was left when calling on friends or business associates. Cdv's of fdamily friends and famous people were also collected and placed in special albums - It became quite a collecting craze.

Miss Cumber was taught photography by Thomas Frederick Hardwich who was the first Professor of Photography at King's College, London and offered Ladies only classes as an option to encourage women's participation. Rose Teanby has discovered that Professor Hardwich advertised his ladies only classes in April 1858 and "Miss Cumber" signed up two months later. It is intriguing how she found out about these classes and why she decided to become a photographer. Alas, we may never know.


In an advertisement in the local paper 'The Star' in 1860, Sarah highlights her tuition by Hardwich. Please see the following for an article by Rose Teanby on Thomas Frederick Hardwich.CLICK HERE...

Sarah Louisa worked as a photographer at 3 Le Pollet address, but information has been given by a descendant that at the end of her life she later moved opposite the road to 2 Le Pollet, but no cdv's with that address are known and this information has to be verified.


Amongst the cdv images owned by the author and contributors to the website are some photographs of Sarah Cumber's relations plus one of Victor Hugo and one of Madame Hugo. The Hugo ones appear to copies of known images from other photographers and not taken by herself - As the cdv collecting craze gathered pace this was a normal occurrence by some establishments to sell images of famous people of the day. It is possible that she was asked to market them.


Research on the family and the permission to use the family cdv images on the website has been given by Sylvia French and her cousin Susan Hawkins. They came into possession of the photographs as the album was created by Sarah Louisa for her sister in law Fanny Cumber (married to her brother William). The album was eventually passed to Edith Knight who was Fanny's niece and Sylvia's and Edith's grandmother. Unfortunately no image of Sarah herself has been found.

To date the author has found eight style variations of cdv backs; there maybe more - All that are known are shown in the guessed order sequence. They have been designated as Style 1. Style 2. Style 3. Style 4. Style 5. Style 6. Style 6a. and Style 6b. There is a Miss Cumber cdv with a Style 3. back in 'The Royal Society Collection' at the V&A, contemporarily dated to 1868.


The earliest carte de visite's from Miss Cumber do not have her name on the front, only on the back logo. It is worth mentioning that as with other photographers of the period very early portraits normally showed the full figure only - it was only later did the fashion of a head or head and upper body pose become popular.


The author's collection of Miss Cumber's cdv's consist of more women than men; this could be due to the fact that being a woman, Miss Cumber may have attracted a larger female clientele than a male photographer - I am sure they would have felt an affinity and understanding with her and vice versa.


Sarah Louisa Cumber's Death Notice appeared in 'The Star' on the same day as her passing (Thursday January 5th 1882), and is shown below:-

On the 5th instant at the residence of her sister, 3 Pollet Street after a long and painful illness, borne with patient resignation, Sarah Louisa Cumber, aged 61 years.

Sarah's Death Certificate lists the cause of death as 'Atrophy'


Many thanks must go to the Family History Section of La Societe Guernesiase for confirming the grave site and transcribing the inscription. 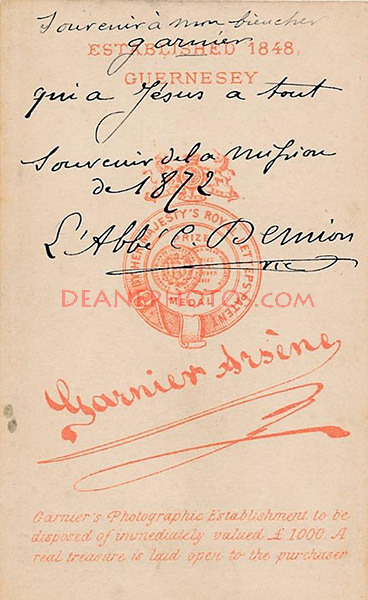