There has been a harbour of sorts at Le Creux (Baie de La Motte) since 1570 and this was started by Helier de Carteret, but due to the high cliffs was very difficult to get to from the land. Helier's son and heir Philippe, cut the original tunnel entrance to the bay 18 years later (1588), and can still be seen today. Philippe de Carteret also made the road up the hill and constructed the windmill. Before that, any export or import to the island of large goods was very difficult indeed and now there was also a place to shelter boats on dry land beyond the reach of high tide.

According to 'Sark' by Ken Hawkes, "La Motte bay had remained without a breakwater until 1822, despite unsuccessful attempts in 1788 and 1816 to build one that would withstand the seas." In 1865/1866 the breakwater was demolished by storms. There was debate as whether Creux should be abandoned and a new harbour built at L'Eperquerie, but it was decided that the harbour at Creux should remain.

A loan of £3,200 was obtained towards the total cost of £6,000 for the new build, plus the existing reserve fund depleted; the interest on the loan being paid by the imposition of a special tax on spirituous liquors. The end result would be a much stronger breakwater, wider quay and proper landing steps, with an opening to the north (since filled in), allowing water to escape and prevent surge when heavy seas were running. Mr Agnew Giffard who was in charge of the extensions to St Peter Port Harbour was employed to supervise the new works. Mr Giffard lost his life in 1868 while returning to Guernsey in a small boat after one of his monthly inspection visits.

The main entrance that is now used, along with the protective harbour wall was not built until 1866.

Maseline harbour is now the main entry to Sark now with Creux being mainly used by local fishermen. When the wind is in the east there are times though when Creux is used.


In volume 2 of 'The Channel Islands' by Henry D Inglis - published in 1834, the following excerpts referring to Creux Harbour and the original breakwater and tunnel are taken:-


" Serk possesses a harbour, though the very least, and more curious, and most picturesque that can be well imagined; but this little harbour lying on the other side the island, boatman from Guernsey prefer making their passengers swing up the side of the rock, to the inconvenience of a longer voyage. This little harbour, called the Creux, is the only accessible part of the island,---accessible however, in a singular way : for when one steps on shore from the harbour, on still is outside of Serk. You have still to pass through a tunnel, about twenty yards in length, beneath the solid rock,--and on emerging from it, a winding path up a narrow valley, leads to the table land. The tunnel, or hole, of which I have spoken, appears to have been partly natural, and partly excavated; and I need scarcely say, that it might be defended against almost any attack, either by a trifling force, or by the application of artificial defences. To detach by gunpowder, a part of the roof, or side of the tunnel, would render Serk inaccessible.

I have mentioned that Serk has another entrance than that by which I was admitted to it: and that it possesses a harbour; and that after stepping ashore, one has still to pass through a long archway under the rock, before it is possible to reach the interior of the island. I visited this singular spot with the seigneur (Le Pelley) for my conductor. the descent to the harbour is by a singularly wild, winding and narrow valley, which leads to the edge of a cliff, on the left with the sea below; while on the right, further progress is obstructed by an inaccessible rock which rises about 150 feet above the path. It is underneath this rock, that the archway is formed: and having passed through it , you stand in point of the little harbour. Across the mouth of it, leaving only an entrance, a pier, or rather a breakwater, has been constructed, -- which from first to last, has cost abot £1600. It is here that the Serkmen build their boats; several were in the course of being built and repaired: and the men were busy with them.

There is also a free School in the island, attended by about seventy children. The schoolmaster's salary is £33; the produce of money which was the overplus of a sum granted by the States of Guernsey for the erection of the pier, and which is lodged in French funds.

Harbour initially built with no south arm or entrance with steps at the end - Giffard's bridge in place. (Start date Late1866 or early 1867)
A press article dated August 13th 1867 - Works suspended due due to the failure of the contractor, James Le Page.
Only about £1,000 worth of the work had only been done.
On March 8th 12th 1868, another press article stated that T Le Gros & Co of Jersey will take over the construction - It took a further two years.
November 2nd 1894. A new slip was in the course of construction

Possible building sequence by the author from study of photographs

Construction of entry and steps at end of breakwater so boats could unload/load passengers at certain tides, is this the 1894 construction?


Any new information will be gratefully received 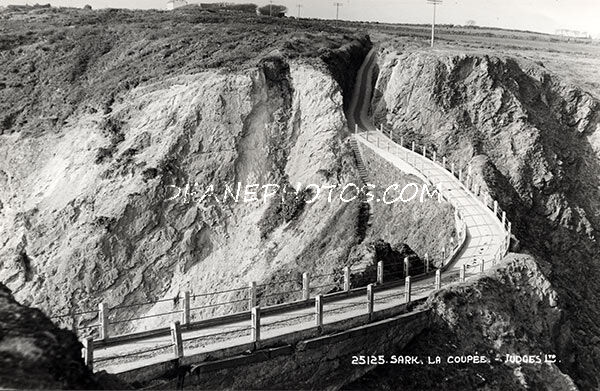