Thomas was born in the Isle of Wight, the fifth son of Peter Singleton and Elizabeth Grant. Sometime between 1851 and 1861 ( appears on the Guernsey census of 1861 aged 14 - Occupation, Brushmaker); he moved with his mother and one younger brother, Charles (aged 11, 1861 Census) to Guernsey. It is not known why they moved to the island or what happened to his father, Peter. His brother Charles does not appear on the 1871 census at the family address in Allez Street.

Thomas, though based in Guernsey, was taking photographs in all of the Channel Islands (including Jersey and Alderney), and was helped with the printing by his wife and and in later years by two of his children, Mary and Hamilton. His first advertisement is believed to be in 'The Star' dated 22nd August 1871, where he lists the places where his photographs can be obtained from.

In the 1861 census, Thomas is listed as a brushmaker, but by 1871 he is shown as being a photographic artist. He would have had to learn his skill from somewhere and it is intimated from an obituary article that he had an association or possibly tutorship in Guernsey from Arsene Garnier and Thomas Hutton, both of who were well known and respected photographers.

Thomas's main legacy to us today are his numbered and attributed landscape photographic views of the islands in the 1890's; this being his money earner due to the increase in tourists coming to all the islands by boat. In the early years he did photograph landscapes also, but due to them not being annotated in any way, his authorship is not easy to determine without previous knowledge. Portrait and landscape view Carte de Visite's, plus landscape stereo views were also made in the 1870's and 80's, though the stereoviews can be hard to identify as for some reason except for a few exceptions he only hand wrote the titles and did not mark his name.

A mall selection of postcards depicting some scenes as the his previous issued images were also issued in about 1899 and these had a small image on the front to allow for the written message. It was only after 1902, did the British Post Office allow a personal message to be placed on the back of the card next to the address. It is known that he was still issuing postcards in 1907 of the interior of the Town Church and the interior and exterior of Victor Hugo's Hauteville House.

Hamilton also produced postcard sized pictures under his own name "HJ. Singleton Photo." after 1902 and these are of the modern variety with the complete image covering the front of the card and the address and message on the back (known as a divided back) - it has not yet been ascertained whether these were taken by him or by his father, but it is suspected that they were by Hamilton himself. The only ones seen by the author to date have been outside and interior images of Victor Hugo's "Hauteville House".

The Singleton images shown on this website are only a small percentage of what is in the Deane Photographic Archives. Time is the main reason for the lack of upload!

Documentation held, infers that over 153 photos of places were taken in Guernsey for his 1890 series, there will be many more awaiting to be discovered. It has been proven that Thomas re-photographed the same scene more than once and then re-issued the image under the same reference number. He also used some images taken in earlier years for this series.

If anyone has any photographs that they cannot identify due to a faded reference number and inscription, please contact the website, as some original handwritten photograph storage envelopes are held in the archive as well as many images.

In most cases, on the back of the 1890's era photographs there is a purple ink stamp with " T. SINGLETON LANDSCAPE & GENERAL PHOTOGRAPHER GUERNSEY." It has been known for the back not to be stamped, but this is an exception and is more than likely human error. His earlier CDV's have THOS SINGLETON PHOTOGRAPHER GUERNSEY", which are also printed in purple. Early landscape images may have no writing on the front or back.

To date, the author has only seen one stereoview that has Thomas's name printed on the back, and that is marked in black ink on a white label deposited on a yellow card saying " VIEWS OF GUERNSEY THE FOULON CEMETERY photographed by Thos Singleton." One unmarked stereoview has been identified by the same CDV image and many more by his handwriting on the reverse.

It is interesting to note that Thomas lists two professions in Guernsey's 1901 Census --- 'Photographer and electrician working at home'. It is possible that he supplemented his income by mending electrical items as well as continuing the photographic side of the business. His wife is listed as a Photographer's assistant his daughter, Mary, a photographer's colourist and his daughter Ursula, a Milliner. By the 1911 Census (aged 64), Thomas, lists no professions, neither do his family.

Thomas was buried at Le Foulon cemetery (Section F No30). The author has visited the site, but unfortunately by original design or accident, there is no headstone. Shown here marked by an 'X' is the exact spot. 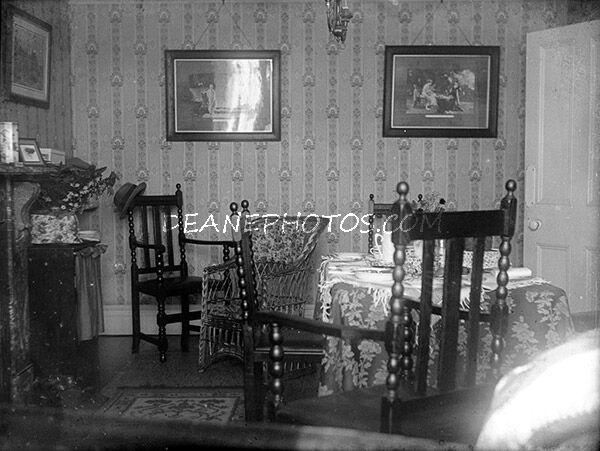