Back
Guernsey Stereo Views
Viewing an image in stereo (sometimes known as 3-D), has had a chequered career in the popularity stakes.
It was all the rage in the 1860's/70's, but fell out of fashion until it emerged as a craze in the 1890's and continued until the beginning of the 20th Century.

It was a very simple method of viewing, a pair of images taken with a special two lensed camera, with the lenses spaced at about the same width apart as the human eyes, or as in the very early years, a camera with a single lens moved deliberately sideways after the initial shot had been taken. They were viewed through a hand held stereo viewer or cabinet. Some very early ones were known as tissuegrams, and when seen through a special cabinet viewer that incorporated a mirror for reflected light plus an opaque glass behind the image, created day and night scenes of the same image subject. Depending on the position of the mirror, stars or candlelight etc were created by pin pricks or slits in the tissue. This style was very popular on the Continent.

Stereo viewing has never gained a dominant foothold since, though there has always been background interest, especially in the 1950's with some 3-D films at the cinema. These still can be seen today and need special red and and blue (cyan) glasses to see them. 'Imax' movies were also popular in the 80's and 90's - The recent emergence of new good quality new 3-D movies, such as 'Toy Story' and 'Avatar', using special polarised or shutter glasses gives better colour fidelity compared to the traditonal red/cyan layout. The introduction of a handy 3-D still camera by Fujifilm and other manufacturers further enhanced the popularity of this form of viewing.

With new technology, television and computer monitors are now being made to view moving and static images - A while ago the football World Cup in 2010 hastened companies to bring this technology to the public; likewise the 2012 Olympics did the same. There has been some softening of the market since then, but that is understandable once the novelty factor has died down.

The market however is still up in the air, with the different types of viewing glasses with each make of television, and until a standard is made, or even better still, a tv that does not need glasses, resistance to stereo viewing will always be there.

To view 3-D images on the internet with a normal computer screen, the usual method of using red/cyan glasses is still the most popular method - these pictures are known as anaglyphs, some examples of anaglyphs have been converted and our shown here and can be viewed if you own red/cyan glasses.
The red should be over the left eye and the cyan over the right.
Albert-Memorial-Stereo 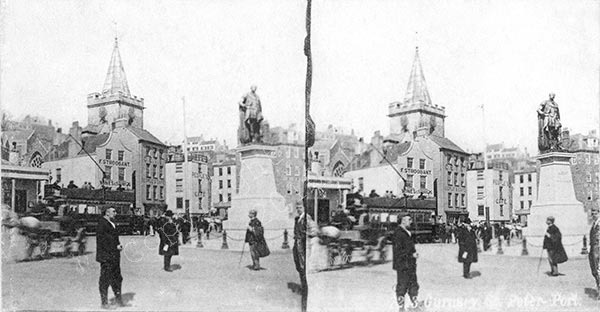