Lawrence Guilbert, often known as Lawrie was born in Guernsey in 1913; the second child (of 7) and eldest son of Charles and Elsie Guilbert. He went to the States Intermediate School, later the Boys' Grammar School.. He would have liked to go to university to study to become an architect, but this was not a possibility given the number of mouths to feed, so he found employment as an office worker at the age of 16 at the Tobacco factory in Cornet Street, which belonged to Bucktrouts - as many other businesses in Guernsey. In those days, cigarettes were made in Cornet Street, while the pipe tobacco department was in Berthelot Street. He worked there all his life apart from the war years, when he was evacuated to England with his wife in June 1940..

They had got married on 6 Sept 1939, 3 days after war was declared, no doubt because they were uncertain as to what lay ahead. On arrival in Weymouth, men of military age were asked to step to one side and given a pep talk inciting them to join the forces, which as Channel Islanders they of course were not obligated to do. But Lawrence Guilbert wanted to, like most of the men. At the end of the talk, men who had questions were asked to come forward, and he asked if before joining up he could accompany his wife up to Morecombe in Lancashire, where she would be staying with her mother. Permission was granted.

Lawrence Guilbert, for some reason never received his call-up papers despite contacting the military authorities several times, so he spent the war years working in a chemical factory in Manchester. His daughter believes he felt rather uncomfortable about not "doing his bit", as all his brothers and brothers-in-law were in the armed services. His daughter, Wendy, always remembers him as having a very military bearing and used to think he looked like a Colonel, with his moustache, and his very upright stance!

After the war, Mr and Mrs Guilbert returned to Guernsey, and Lawrence Guilbert took up his old job again, and worked his way up the ladder until he became manager of the factories, and it was in charge of the move to the new factory in La Ramée, somewhere around 1959/60. His daughter believes he worked with the architects to design and plan the building to be as efficient as possible, and it is definitely known that he designed the surrounding gardens, with a little roundabout at the entrance.

When his daughter Wendy was born in 1947, they lived along Les Camps, it was the 3rd house on the left, as you come from the Jerbourg crossroads, the one with a room added to the front; that room was used as his wife's hairdressing salon, the Vanity Box; she had also had another one, the Beauty Box, which was just at the bottom of St Martin's school lane on the Grand Rue, but she closed that one down when her daughter was born..

In 1952, they bought a lovely bungalow in the Blanches Pierres lane, just off the Hubits, Mr Guilbert built his darkroom in the loft there, and was also a keen gardener. But apart from gardening and photography, his keenest interest was in painting and drawing which he did very well.

It is not known when he took up photography, but his daughter believes he acquired a little Brownie camera soon after she was born, to take "snaps" of his offspring! That led on to other kinds of camera, and the building of the darkroom and enlarger and Wendy remembers being required to pose pretty often in her childhood and teenage years. Hated it! as she always found he put her in unnatural poses, e.g. surrounded by dolls (which she never played with, being a real tomboy!) with a blade of grass between her teeth and a silly sun-bonnet affair.

Wendy doesn't really remember when he gave up taking photos, but she is pretty sure it was at her mother's instigation; he had also taken up astronomy at that time, and she thinks he was required to make a choice. Must have been in the sixties.

When the tobacco factory stopped producing the local brands in the early 60s, Wendy's dad found himself out of a job; however in their wisdom the Bucktrout directors found him a job as under-manager, overseeing the accounts department of the Royal Hotel. He took over that post from an elderly lady who was retiring and had tended to let things slide somewhat, so spent many evenings doing unpaid overtime to bring things back up to standard. However his superior, the manager of the whole hotel, once upbraided him for arriving 10 minutes late one morning. So he walked out then and there. After that he managed to find work with the States, visiting farmers to make statistics about their milk yield. But he was forced to retire just a few months before he would have been entitled to a pension.

He was a keen football player in his youth - Wendy can't remember his team, but they wore navy blue socks, which she used for Father Christmas to fill! 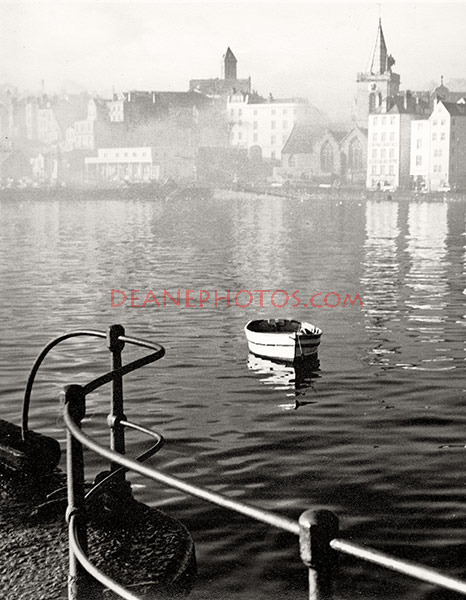