We do not know how long Andre was in Guernsey but we do know that by the following year, 1879, Carel Toms listed Thomas Grut as being an active photographer. We presume that Thomas had acquired the property as we found his calling cards that stated: ‘Photographie Parisienne Grut Late Andre listed at 2 Victoria Crescent Victoria road Guernsey’. We believe the ‘Late Andre’ was to alert the public that he had taken over the business and property from Andre, although ‘late’ could also have meant he had died.
Later Thomas’s calling cards dropped ‘Photographie Parisienne’ and any mention of Andre. They stated: T.A. Grut 2 Victoria Crescent Guernsey."
Reverse of previous image 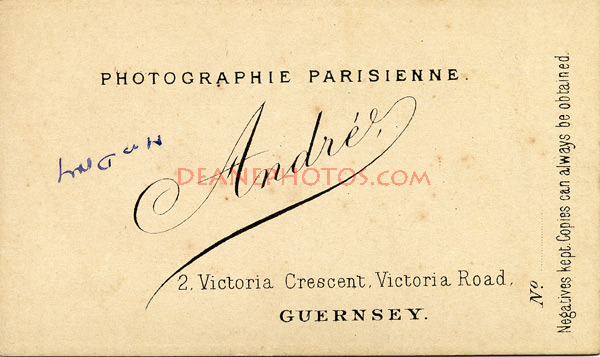 The card has 'Mrs Day' written in fountain pen thereon. This may not be contemporary.

The card has 'Mrs Day' written in fountain pen thereon. This may not be contemporary.